How To Recreate The Looks From These 5 Iconic 90s Films

The 90s was an iconic decade – there’s a reason all-things-90s continuously pop in and out of modern trends. Although there are some aspects of the 90s we can undoubtedly go without (velcro wallets and capri pants), others are too hard to let go of.

So, to pay homage to 90s fashion trends, we’re about to throw it right back by taking a look at 5 of the best films from the decade (in our opinion). Main characters in mind, we’re going to show you how to recreate their oh-so-desirable, modernised style.

“Now, if you excuse me, I’m going to go home and have a heart attack”, forlorn Vincent claims in his blood-soaked black suit. 1994’s Pulp Fiction was and remains a classic, praised for its intelligent casting and seedy characterisation. With sex, crime and violence at the forefront of the film’s interest, Pulp Fiction’s drug-fuelled relationship between Vincent Vega and Mia Wallace became almost as iconic as the film itself. With every iconic character comes an iconic look, and the look that Vincent Vega took on for the film was truly unique in itself.

Regularly adapted for fancy dress, Vega’s style consists of a black suit with a white shirt, often stamped with the symbolic bolo tie. Admittedly, the bolo tie isn’t going to swing its way into modern-day trends any time soon (and the slicked back ponytail can, debatably, stay in the 90s, too) however, the suit lives on.

Get the look: To adopt Vega’s look for a 2020 recreation, you’ll need to grab yourself a well-fitted black suit. Pair it with a white shirt and accessorise the look with a black tie (or no tie at all), and a pair of polished brogues. To go really ‘Vega-authentic’, consider livening the suit up with some collar tips – a handy compromise to the hell-ridden bolo tie. Carry a briefcase and stock up on some fresh grooming products to slick that hair back within an inch of its life. 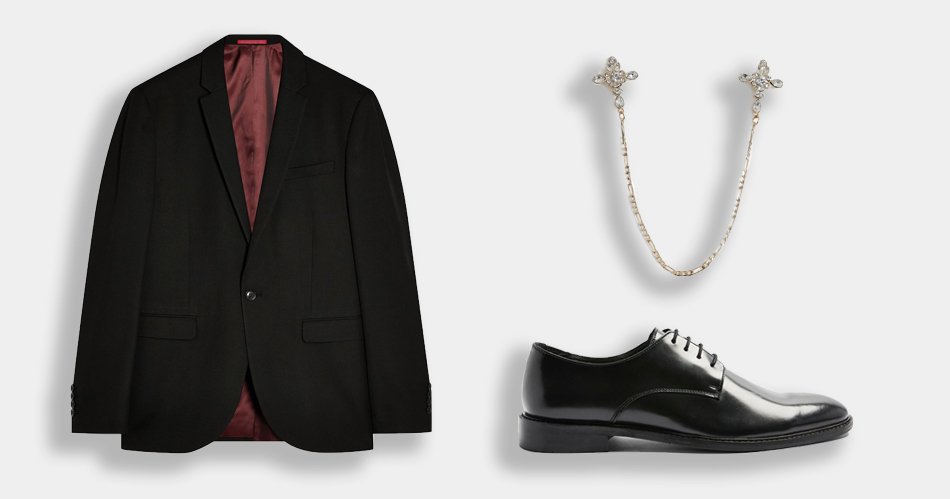 The Jack Dawson ‘Romantic’ Titanic look is one that many a man swoons over. Who doesn’t want to look like Leo’s charming, artistic heartthrob from way back when? Despite his knack for wearing other people’s clothes, we’re all for the ‘penniless’, old romantic ensemble (and trust us – so are the girls). So, to get started, you need 3 main ingredients; a grandad collar shirt, an overcoat and some curtains (the hairdo kind).

Get the look: Shirts will never be a thing of the past – whether you go casual, formal, patterned or plain, shirts will, unlike Mr Dawson, live on. Fortunately, Leo didn’t rock a shirt covered in pineapple graphics nor watermelon prints (not in this film anyway). Instead, he wears the grandad collar shirt… and he wears it well. The defining feature of the grandad collar shirt is the lack of, well, collar. Instead of a standard, fold-over collar, the grandad collar is far shorter (if there’s one at all). It flows into the placket (buttons) making it a relaxed style – perfect for smart-casual wear. If you don’t know, get to know.

In addition to the good old grandad collar shirt, Jack Dawson reps the (albeit stolen) overcoat. An overcoat is a male must-have. Ideal for dressing both up and down, the overcoat is transferable and timeless – it’ll never go out of trend. Finish the look with a pair of smart casual trousers (such as some smart joggers) and you’ve got yourself the Jack Dawson look, fresh from the Titanic. 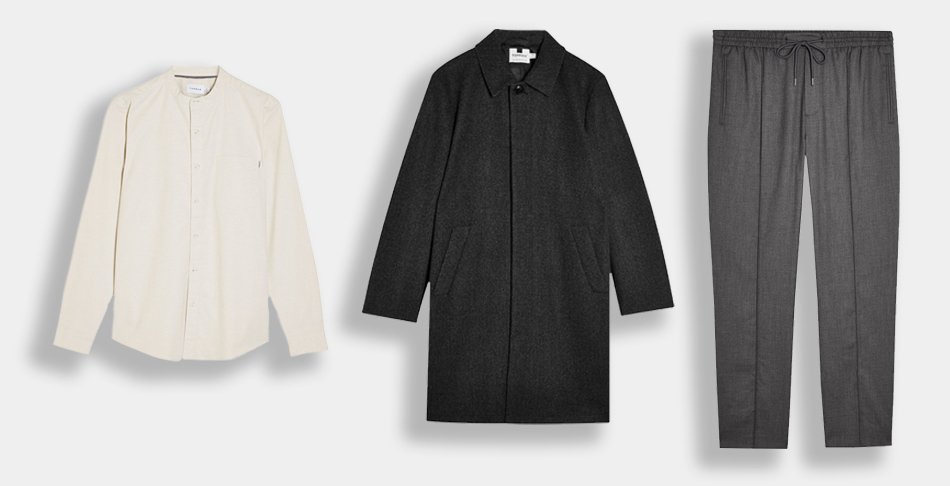 Yes, Tyler Durden delivers a strong philosophy of life, but he also delivers a strong wardrobe game in Fight Club that we simply can’t ignore. Even if “we buy things we don’t need to impress people we don’t like”, it doesn’t hurt looking good doing so, especially if the outfit in question is this good. Printed shirts? Bang on trend. Side stripe trousers? Fine. Red leather jacket? Perhaps not, but we’ll roll with it regardless.

Brad Pitt takes on the role of Tyler Durden, throwing in some effortless style as he does so. This almost action-man attire may have once been the talk of the town, but nowadays, it’s pretty accurate to how most of the male population are dressing. Printed shirts and side stripe trousers have become the epitome of streetwear, so achieving this look is pretty damn easy.

Get the look: Printed shirts are plenty – they’re everywhere. Usually, we’d suggest styling them with a plain pair of trousers for balance, but let’s face it, if you’re looking to Tyler Durden for style inspiration, balance probably isn’t your priority. So, in the name of the 90s, partner your printed shirt with a pair of side stripe jeans (or trousers) and a bold leather jacket. It doesn’t have to be red, either – black would work just as well.

The legend of Heath Ledger lives on through his on-screen performances, and who are we to deny that his portrayal of Patrick Verona in 10 Things I Hate About You isn’t up there with his best? It’s an American teen romcom in which he swept the world with his irresistible charm and indisputable good looks, so, if you want to be in the same swoon league as Heath Ledger in 10 Things I Hate About You, imitating his look is the best place to start.

Get the look: Curly locks aside, Patrick Verona’s ensemble is more than achievable. Wearing casual, effortless clothing takes little to no effort – that’s what makes this attire so easy. To get the above look, opt for a classic black T-shirt, whack over a shirt (buttoned up or undone) and layer a navy jacket on top. A Harrington jacket or chore jacket will suit fine, but if the weather’s warm, consider an overshirt instead. Finish the look off with some casual trousers and a dash of charisma.

Dazed and Confused is a coming-of-age film that not many of us are in a rush to forget, and how could we when it was one of the first times we witnessed the great Matthew McConaughey on screen? This classic 90s film shows his character, David Wooderson, repping a graphic print T-shirt throughout, so this style itself isn’t too hard to multiply. Fun fact: the T-shirt graphic is the Tooth Fang & Claw album cover by Ted Nugent and the Amboy Dukes. Although we may not have this in stock (does anybody?) we still have a pretty decent stock of other graphic tees to recreate this vibe.

Get the look: Along with the graphic T-shirt, Wooderson wears a pair of blush pink trousers. Quite bold for most, this look can certainly be modernised with a solid pair of blue or black wash jeans instead. Accessorise with a belt and a low hanging pendant necklace to characterise the outfit, and you’re good to go.

We’re all about recreating and revamping old styles, especially when there’s a little 90s inspo to follow. If you’re feeling nostalgic, check out some of our throwback brands including Tommy Hilfiger, Calvin Klein and Levi’s. Whether Jack Dawson is your thing or you’re vibing off of Vincent Vega, we’ve got you covered.

Find Out Which Hat Suits Your Head Shape

What To Wear To A Summer BBQ